Biopropane (also known as bioLPG, eco-propane, renewable propane and rLPG) is a clean-burning, renewable fuel which is a ‘drop-in’ replacement for autogas and liquefied petroleum gas (LPG) in all applications. It is molecularly identical to propane (C3H8) produced from petroleum refining.

Biopropane undergoes combustion reactions in a similar fashion to other alkanes. In the presence of excess oxygen, biopropane burns to form water and carbon dioxide.  Being molecularly identical, biopropane is a drop-in replacement for traditional propane. It can be used in all applications with all equipment designed to use propane as a fuel without modification. Unlike liquefied petroleum gas (LPG), biopropane is by definition a renewable source of energy. Several biological and chemical process pathways are being explored to produce biopropane on a commercial scale.

Researchers at MIT announced in 2007 that they had developed a process for the production of biopropane from corn or sugarcane which employed supercritical fluids. A start-up company called C3 BioEnergy was formed to commercialize the process. The C3 BioEnergy process has not been deployed commercially.

A transportable biomass-to-biopropane conversion system was proposed by Apollo Bioenergy, Inc. (which later became Alkcon Corporation) as part of a National Science Foundation STTR grant proposal in 2013. The proposed system employed a gasifer, a methanation step and a proprietary methane-to-propane conversion process. 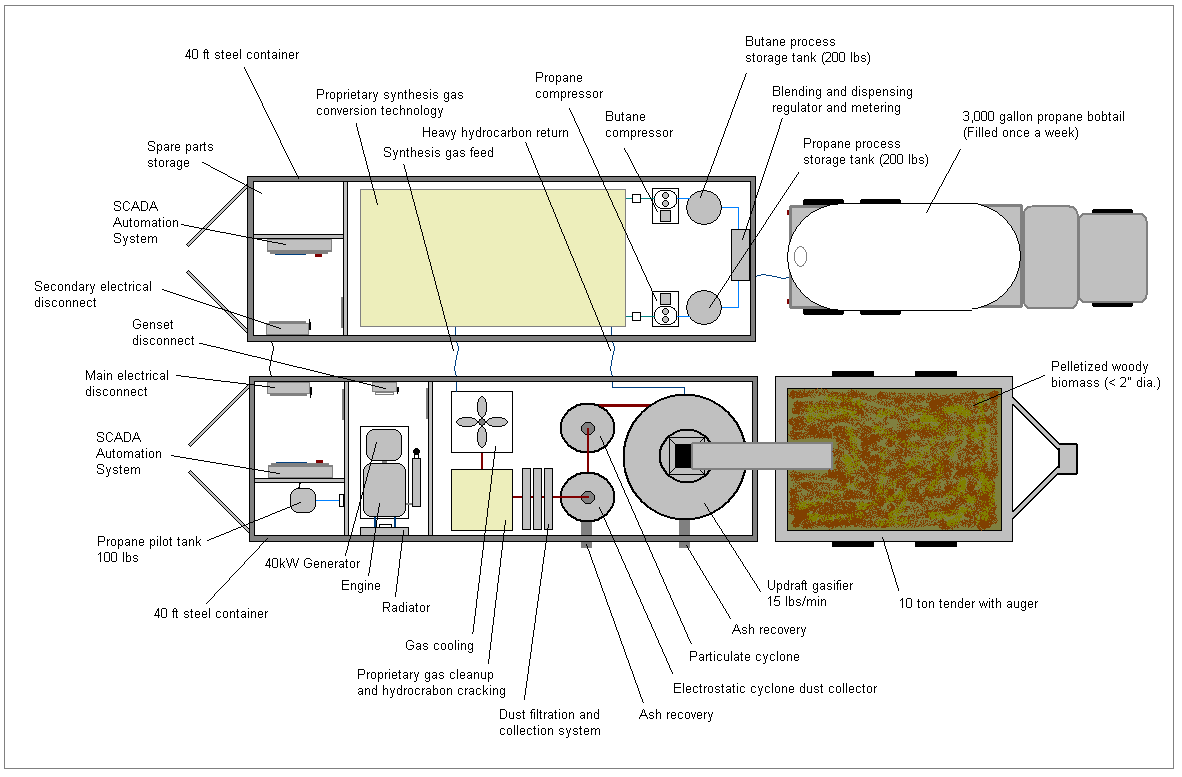 The continued pursuit of a methane-to-propane conversion pathway by Alkcon Corporation was highlighted in an article entitled Methane-to-Propane Startup Wooing Investors published by Northern Nevada Business Weekly in June 2014. After Alkcon filed a provisional patent earlier that year, their novel ‘gas-plasma methane-to-propane conversion system‘ was further disclosed in 2015 in the same publication.

A team of scientists at Imperial College London announced in 2014 that they had modified Escherichia coli bacteria to produce renewable propane. However, the amounts were one thousand times less than what would be needed for commercial applications. Dr Patrik Jones, from the Department of Life Sciences suggested that a commercially viable biological pathway might be achieved in five to ten years.

Biochemists from the University of Manchester published research in April 2015 describing improved synthetic pathways for the biosynthesis of propane gas. Their research utilized CoA intermediates that are derived from clostridial-like fermentative butanol pathways. This provided a significant improvement over the earlier results obtained via the FAS pathway at the Imperial College London in 2014.

In October 2014, Neste announced their intention to produce biopropane at their renewable diesel plant in Rotterdam by the end of 2016. Propane gas would be separated from the NExBTL process sidestream waste gases. After several delays, biopropane production finally begin in March 2018. The biopropane produced by Neste is being distributed via SHV Energy in Europe.

Phillips66, Global Clean Energy, Marathon Oil, Valero, and Renewable Energy Group (REG) also have renewable diesel plants planned or operating which will use direct catalytic hydrodeoxygenation (hydrogenolysis) of triglycerides, a process which can yield renewable propane, via the same sidestream gas separation process used at the Neste facility in Rotterdam.

In 2019, the U.S. Department of Energy (DOE) Office of Scientific and Technical Information (OSTI) published an abstract entitled ‘Low cost modular plasma system for reforming of natural gas‘. It was reported that “a commercializable 1kW plasma system including reactors, a plasma pulse generator and a gas supply module” for the reforming of natural gas (NG) into higher hydrocarbons (primarily acetylene) was developed by Rivis, Inc. in North Carolina under a DOE SBIR Phase II grant.

At the WLPGA Global Technology Conference in 2019, PlasMerica LLC announced that they were also developing a gas plasma methane-to-propane conversion process. The US Patent and Trademark office approved patent application 2018/0243721 from Plasmerica. They received patent 10,737,235 for their gas-to-liquid reactor design.

For additional information on feedstocks, process technologies, and the environmental impact of biopropane, download Process Technologies and Projects for BioLPG published in 2019, by Atlantic Consulting.